When enthusiasm outweighs reason, there will ultimately be excruciating anxiety, pain and permanent loss of capital. 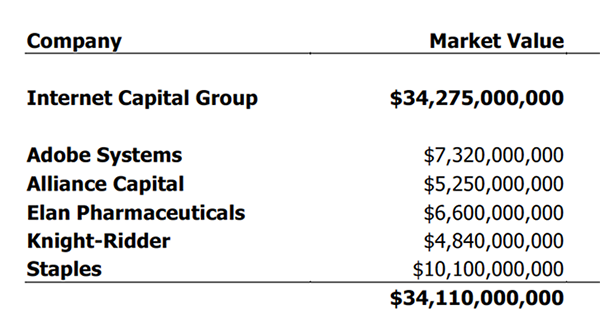 The High Price of Enthusiasm

Many moons ago (December 31, 1999) I wrote an investment commentary on the levitating prices and valuations of any publicly traded investment remotely connected to the internet, which was then becoming a more integral part of our everyday lives. One company in particular—the Internet Capital Group—had been spun off by Safeguard Scientifics, a company we followed, owned in client portfolios and had a high regard for.

Safeguard’s business model—then and now—is to purchase stakes in privately held companies, nurture them, and then take them public when the company has grown meaningfully. It is a valid business model—venture capital in a public wrapper.

In August of 1999, Safeguard had spun off the Internet Capital Group (ICGE), who hoped to become the GE of the Internet. The clamor to buy shares was deafening. ICGE’s Initial Public Offering (IPO) price was $12/share in August of 1999. By December 13,1999—when I was moved to write an investment commentary—the price of ICGE shares had risen to $270—a gain of more than 2,100%. At that price, the market collectively valued ICGE at more than $34 billion.

As an investment analyst, portfolio manager and fiduciary, it is important to me to determine some reasonable estimate of the intrinsic value of an asset to determine its suitability and expected return potential. Those basic processes are: present value, dividend discount modeling, discounted cash flow modeling, etc. These methods involve some subjectivity and are thus never perfect. They are however critical to a rational investment decision. Without some estimate of intrinsic value, committing funds to a security is a pure crapshoot, not something I can contemplate as an analyst and fiduciary.

While the subjectivity in discounted cash-flow analysis of a company is unavoidable it struck me as absurd that an investor could pay $34 billion to own all of ICGE and its current $44 million annual loss,

an investor could own all of Adobe, Elan, Staples, Knight Ridder and Alliance Capital with collective revenues of $14.3 billion and profits of $1.5 billion...real companies, with real earnings and real assets.

Subjective or not, ICGE was trading at a market price that (almost—few absolutes in investing) no amount of future success could justify. To reach the revenue levels of the Five today, ICGE would have had to grow revenues at more than 50% annually for 16 years…a ridiculously tall order.

In short, odds did not favor a good outcome for ICGE investors at those elevated prices, and in fact despite a market value that ultimately rose above $60 billion, investors in ICGE were soon watching the price of shares drop precipitously, as eager to get out on the way down as they were to get in on the way up.

The Internet Capital Group survives today—after multiple reorganizations and additional rounds of raising capital and now called Actua (ACTA)—with a market value of $466 million, less than 1% of its peak valuation. The company is still suffering from operating losses. But it does have revenues, a balance sheet, and a positive net worth, despite cumulative historic losses of more than $3.5 billion. Some venture!

How Many Tulips Can a Bitcoin Buy?

Fast forward to the present day. The US equity markets have been on a nearly ten-year tear from the depths of the mortgage market meltdown and Great Recession. Investor enthusiasm remains stubbornly high. So-called “cryptocurrencies” are the mania of the moment. The most prominent cryptocurrency—Bitcoin—which began 2017 near $1,000 coin now trades near $16,000 per coin, an astonishing 1,500% gain. This is alarming for multiple reasons.

Businesses, revenues, profits and their valuations do not generally grow 1,500% per year. This price action is not the price action of an investment. It is something else.

Most important, cryptocurrencies have no intrinsic value. No revenues, assets, net worth, profits or dividend payouts. There is literally zero internal rate of return or intrinsic value. There is no way to come up with any notion of fair value.

While I had a low opinion of the Internet Capital Group in 1999 as an investment—due to its unreasonable valuation—ICGE at least had the potential to grow revenues and profits. It is still in business today.

The Truth About Investing: Then, Now and Forever
In my commentary of 1999 I had a paragraph about investing truths:

The Truth About Investing
A wise and highly successful investor from Omaha recently said, “investing is simply the proposition of exchanging a present sum of money in expectation of receiving a future sum of money." One can only hope to do enough research to accurately estimate the size of the future cash flow and assign a probability to the future cash flow high enough to justify giving up a certain sum of money in the present. In fact, many investors consider the value of an investment to be the present value of all future cash flows one can expect to receive from owning the investment. For a bond that statement is clearly true. A bond's current price is the present value of all future coupons and principal. For a stock it is also true, although the future cash flows are subject to a wide variety of uncertainties. Prudent equity investing usually involves an assessment of a company's business, business model, competitive advantages and threats, management, and a host of other company and industry issues. One can then develop some rough probabilities regarding the likelihood of the company growing, remaining profitable and so on. The more an investor can properly estimate and discount future cash flows and the probability of those cash flows, the more likely he or she is to be a successful investor.

True then and true now. And that timeless truth leaves cryptocurrencies to some other realm: rank speculation, gambling or worse, since those valuation assessments cannot be made for a cryptocurrency.

The investing world is full of speculators, promoters, compulsive gamblers and their ilk. The cryptocurrency day in the sun is surely not over…until it is. And then—with no net worth or intrinsic value for support—it is likely to go down as fast as it went up. It is entertaining to witness and a real head-scratcher for a reality-based investor like myself. But this cryptocurrency mania is not likely to end well. You heard it here first.

You can download the Investment Commentary on the Internet Capital Group from 1999 here: