Recent Olympic performances have sparked a discussion about the greatest Olympian of all-time: Usain Bolt or Michael Phelps. The discussion puts cognitive biases front and center. 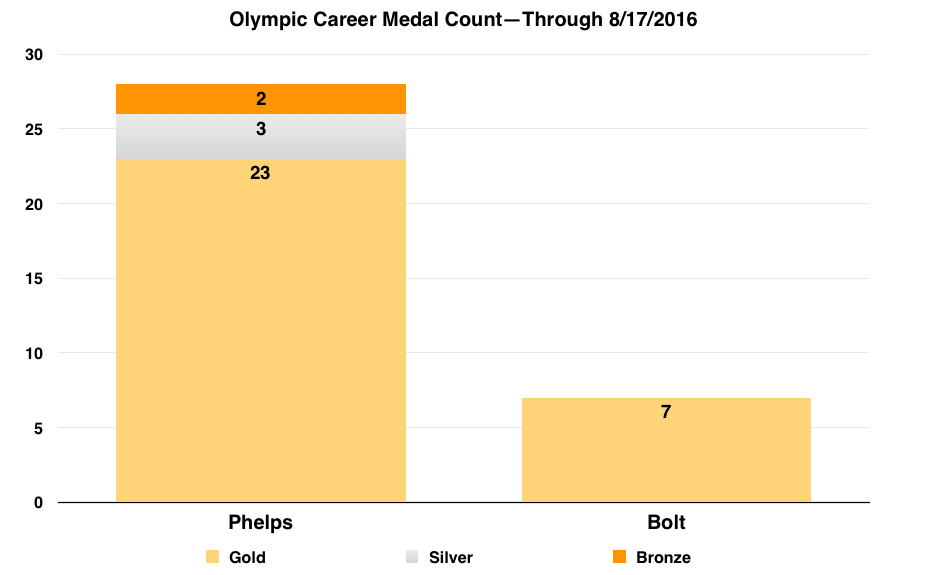 This past Monday we posted an article on our blog about cognitive bias using a very topical question as a prime example. The question was: Who is the greatest Olympian of all-time? The night before, Jamaican sprinter Usain Bolt won the 100 meter race for the third consecutive Olympics. It was his seventh gold medal. He holds the world record in the event and in the 200 meter race as well. His running is a sight to behold.

The question arose because the swim meet portion of the Olympics had ended on Saturday night. U.S. Men’s swimmer Michael Phelps won his 23rd gold medal and 28th overall at these games. The Greatest Olympian question was framed around Bolt vs Phelps. In the blog post from Monday we commented that we had heard a BBC journalist call Bolt the Greatest Olympian of all time. That struck us as a statement completely unjustifiable by the actual career performances of both athletes, and can only be explained by cognitive bias. The BBC journalist is not alone.

ESPN televises an entertaining sports talk show most weekday afternoons. The two hosts are knowledgable and opinionated. My son and I enjoy it for the banter and entertainment. One of the main topics on Monday afternoon was the Bolt vs. Phelps as Greatest Olympian of all-time question.

Cognitive Bias on Full Display
Our blog post on Monday was about cognitive bias and how many people are easily able to ignore facts and delude themselves with some other irrelevant or unquantifiable quasi-factoid. On the topic of Greatest Olympian, both ESPN commentators agreed that Bolt’s performance the previous evening made him the Greatest Olympian of All Time, diminishing Phelps’ career performance with these laughable statements:

Let’s look at each of those statements.

Swimming is a niche sport.
Not sure how you define a niche. What is true is that the U.S. swimmers regularly win more golds and overall medals for the U.S. than any other sport at the Olympics. If swimming is a niche, it is the most successful niche sport in America. Niche or not is irrelevant to the achievements of each athlete.

More people are interested in track.
Don’t know how to quantify or measure that. True or not, it again does not address the accomplishments of each athlete.

Bolt is a better media attraction.
Are they awarding medals for tweets and posing? You know the answer.

All of these vague and indeterminate statements by the two ESPN commentators are but one visible example and prove the point about how cognitive biases are ubiquitous in the human experience.

It is easy to see how and why biases often arise. In this case, Bolt’s races are breathtaking. He runs away from the best athletes in the world. His races are in stadiums of 80,000 cheering fans. He mugs for the media as well as anyone. The ESPN commentators are clearly more familiar with track as a sport and track athletes. They also suffer from an availability bias, disregarding numerous athletes from a distant era and sports they have less knowledge of. Despite leading the medal count for the U.S. at most Olympics, most Americans are only exposed to competitive swimming onec every four years—at the Olympics.

Bolt is favored to win the 200 meter race in these Rio Olympics and the 4x100 meter relay as well. With those two golds, Bolt would be in a five-way tie for second at 9 golds—14 fewer than Phelps. For Bolt to equal Phelps, he would have to come back to the Olympics and win the same three races at five more Olympics—until 2036.

Phelps won more individual and relay gold medals, at more Olympics, in more races, at more distances and with a greater variety of teammates. There is no objective way to say Bolt is the Greatest Olympian of All Time. This is not even a contest.