U.S. Stocks Rally. The Rest of the World…Not So Much. 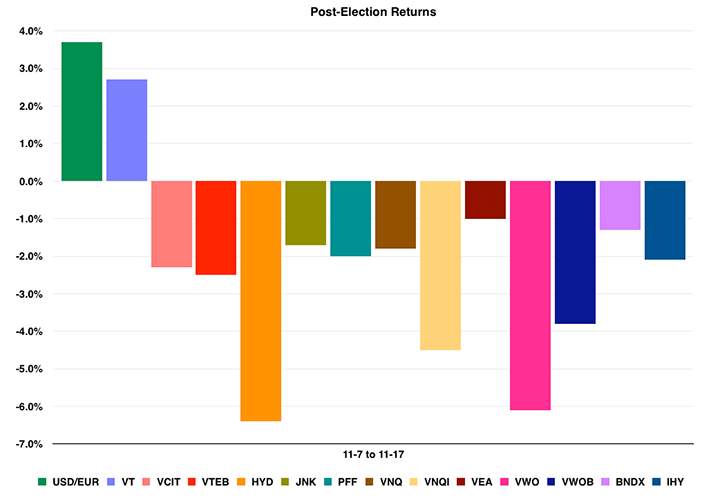 After an election evening sell-off in the S&P futures market of about 5%, U.S. stocks have rallied smartly in the aftermath of the U.S. elections. The S&P 500 and total stock market has rallied 2.7% from the day before the election through the close on 11/17/2016. The U.S. dollar has also surged, gaining almost 4% against the Euro. The rest of the world’s capital markets were not invited to the party.

U.S. bonds, preferred stocks and real estate have fallen anywhere from 2.0% to 6.5%. Global stocks, ex-U.S. are down 2.1%. Emerging market stocks are down 6.1% and emerging market bonds are down 3.8%. Global real estate is down 4.5%. Volatility—a measure of investor anxiety as measure by the CBOE VIX—is also down sharply.

See legend below for symbols and asset classes.

These are fairly dramatic price declines for such a short time period. While a new presidential administration is still two months away from inauguration, the markets—as they always do—are already reacting and making assessments about the future value of assets.

The surge in the U.S. dollar explains much of the decline in global asset classes. What remains to be seen is how much of that surge in the dollar is the reaction to an unexpected outcome in the election or an accurate assessment of the future economic landscape and policies.

Most surprising is the action in the U.S. market outside of stocks:  bonds-down, muni bonds-down, real estate-down, preferred stocks-down. This may be nothing more than a reaction to anticipated Federal Reserve rate hikes or an anticipated decrease in the top marginal tax rate. Time will tell. But there is nothing fundamentally different about these asset classes ten days after the election than the day before…except they are all cheaper. And cheaper is always a better entry point for new cash.

We continue to believe that the global emerging markets offer the best expected returns for the coming years owing to their stronger economic growth and relatively lower valuations. U.S. equity markets have seemingly cheered the new president-elect and his anticipated programs. Yet the U.S. stock market has rallied almost eight years now and while official statistics point to a robust economy, Trump got elected on appealing to the realities across much of America—that whole swaths of the populace have not participated in the gains and have seen their fortunes stagnate or even decline.

The rally in U.S. stocks may prove to be short-lived as mere emotional reactions to the expected changes in tax rates, tariffs on imports or “stimulus.” But until more discretionary income is put into the hands of millions of Americans who have not participated in stock market gains, the aggregate demand in the economy will languish and U.S. stocks will have a hard time making headway.