From Moody’s: “Passive Investing to overtake active in just four to seven years.” Clothier Springs Capital Management has been on this (ETF) bandwagon since our founding in 2010. 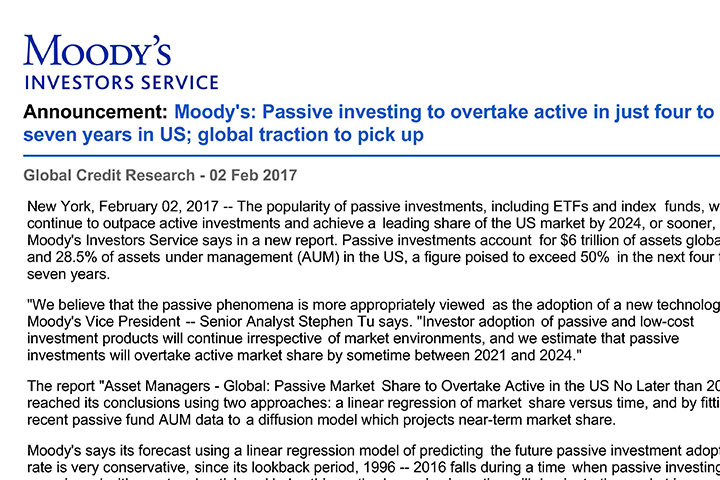 From the Moody’s Report:
“The popularity of passive investments, including ETFs and index funds, will continue to outpace active investments and achieve a leading share of the US market by 2024, or sooner, Moody's Investors Service says in a new report. Passive investments account for $6 trillion of assets globally and 28.5% of assets under management (AUM) in the US, a figure poised to exceed 50% in the next four to seven years.”

The reason is simple: passive investing generally, and ETS specifically, continue to outpace their more expensive actively managed brethren. The performance advantage comes largely from the cost advantage. A second but no less important advantage comes from simply capturing market exposures, instead of the self-inflicted wounds of active trading and maneuvering.

In short, passive investing and ETFs help investors of all kinds allocate assets, diversify broadly, efficiently capture market returns and ultimately improve the chances to earn the returns they require.

From Warren Buffet, Berkshire Hathaway Chairman and the 2016 Annual Report:

“The bottom line: When trillions of dollars are managed by Wall Streeters charging high fees, it will usually be the managers who reap outsized profits, not the clients. Both large and small investors should stick with low-cost index funds.”

“If a statue is ever erected to honor the person who has done the most for American investors, the hands-down choice should be (Vanguard Founder) Jack Bogle. For decades, Jack has urged investors to invest in ultra-low-cost index funds. In his crusade, he amassed only a tiny percentage of the wealth that has typically flowed to managers who have promised their investors large rewards while delivering them nothing – or, as in our bet, less  than nothing – of added value.

In his early years, Jack was frequently mocked by the investment-management industry. Today, however, he has the satisfaction of knowing that he helped millions of investors realize far better returns on their savings than they otherwise would have earned. He is a hero to them and to me.”

Where Are the Customer’s Yachts?
The jury is in for anyone who cares to look at the evidence. It is only because so much of the Wall Street complex is organized to maximize their profits (instead of the clients') that active management endures. It is only—as Upton Sinclair stated so eloquently—“that it is hard to get a man to understand something when his salary depends on him not understanding it”—because so much of the business and legions of financial service workers’ compensation depends on not understanding this simple passive investment premise.

The ETF revolution is assuredly and negatively impacting Wall Street paychecks already. And monies that do not end up in Wall Street pockets remain in investor’s accounts—a good thing. The pain Wall Street is suffering is causing some peculiar pushback—akin to the spurious propaganda floated by Big Tobacco when that industry rightly came under scrutiny.

Hedge funds have suffered serious outflows of investor capital in recent years. As most of us know, hedge funds in general are the most expensive and least productive (for investors) investment vehicles. Case in point: the Department of Labor has been trying to pass legislation that requires any investment professional who advises retirement assets for private clients to assume fiduciary duty—simply the duty to act in the client’s best interest. It is a duty Clothier Springs welcomes and accepts. Much of the wall Street complex—brokers and insurance companies especially—have fought against the DOL rule. The inference is obvious.

But the DOL rule has also been attacked as the proximate cause for the asset outflows of hedge funds by at least one prominent hedge fund manager. Here is a recent quote from a well-known fund of hedge funds manager: “the DOL ruling is akin to the Dred Scott decision.”  In effect, the hedge fund manager compared the duty to act in a client’s best interest to the Supreme Court ruling in 1857 that “Negro’s imported to the US as slaves are not citizens and have no standing to sue for freedom.” Either that hedge fund manager is seriously delusional or he has an axe to grind……we suspect the latter. Hedge funds are suffering because they cost too much and deliver too little.

The Sea Change Continues
There will be more pushback from the actively managed folks as the passive revolution continues. It will be the equivalent of “smoking does not cause cancer” from the tobacco industry. You will see more active investment industry positioning around words like “focus” or “conviction” or “low-correlation” in an attempt to slow or reverse their asset outflows. But it won’t change the facts and it won’t stem the tide.